Gad Elmaleh, a French stand-up comic and movie star, did a show in Lyon that’s on DVD now, called L’autre, c’est moi. All the kids have seen it here. Well, most of them. In it, he recounts how at school one of the first sentences he learnt was “Where is Brian?” He and his classmates respond “Brian is in the kitchen.” Brian also has a sister. “Jenny is the sister of the Brian. Jenny is in the batttthhhhroom.”

I thought I would see if that old-fashioned way of teaching English still works in the 21st century. It turns out it does. 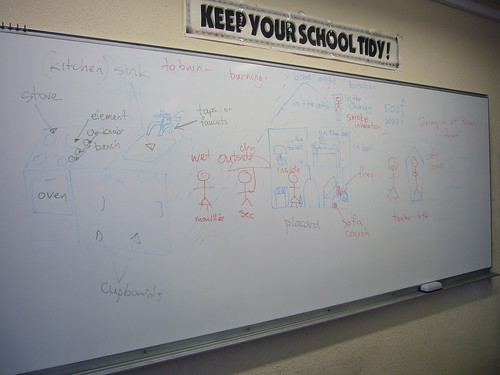 I drew a house on the board with a kitchen and bathroom and a lounge and a bedroom. I realised that it’s actually a good way to teach prepositions.

So, a couple of weeks ago Nouvelle Star, the French version of…

So, I am finally getting around to posting stories about my trip…